Beluga whales live in icy cold salt waters like Alaska and are very large and obtain a white color once an adult. The young tend to have a more grayish color. They love to eat smaller animals like squid, octopus, crabs, snails, sandworms, as well as fishes such as capelin, cod, herring, smelt, and flounder. No fish and not even a Beluga whale drinks the salt water they live in. Drinking the salt water would cause dehydration so they keep hydrated from the fish they eat. Unlike dolphins they have a dorsal bridge (fin) which is very small instead of a large fin on their back. This difference in body structures allows them to navigate thru the icy water with ease. Belugas have five things in common with humans which is breathing, mammary glands, hair, endotherms, and birth their young. They can submerge under water but must come up for air. They birth their young vaginally and nurse them as well. Beluga whales are born with hair along the tops of their head that allows the young to find their mother for nursing. Just like us they can maintain their body heat internally. You may even think they are speaking thru their mouth with their unique sound but it’s actually coming from their blow hole on top of their head which they also breath and eject water from. Although they have predators such as polar bears, great white sharks and other sea monsters, their white color allows them to blend in with the ice. So you can see how global warming is affecting their safety. 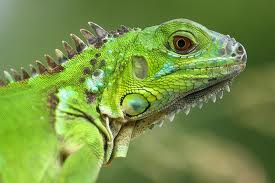 Green iguanas, one of my favorites! They are found naturally in the rain forests of northern Mexico, the Caribbean Islands, Central America, and southern Brazil. Green iguanas are entirely herbivorous and are mainly active during the day. They eat all types of rich greens, vegetables, and fruits. They collect water from rain as well from condensation on flowers and leaves but mainly from the foods they eat. Occasionally an iguana will eat insects but it’s mainly the young that will do so. Iguanas have many small teeth which allows them to rip and tear their food instead of chewing. One of the great features they have is a ton of spines on their back that helps protect from prey. Birds of prey such as hawks and eagles tend to eat iguanas as so as foxes. But it doesn’t stop there, marine iguanas are eaten by large fish such as sharks at times.

We all know that giraffes are the tallest land animals of all times. Giraffes can be found in within Central and South Africa. Primarily they live in the savanna areas in the sub-Saharan region of Africa. They are herbivores which means they don’t eat meat. Like how innocent is that? Just lovely. They eat twigs and leaves but their most favorite tree would be an acacia tree. Of course their long neck makes it easy to rich the finest leaves that neither you nor me could reach stretching high standing on our tippy toes. Even though they are very tall and can be quite dangerous when swinging their necks, lions still keep them in sight. Not many predators but a lion can compete with the challenge. However, baby giraffes have to stand clear of smaller predators like hyenas.

Bengal tigers can be found in India and tend to be called Indian tigers. There are numerous different types of tigers and Bengal is one of the most common. Over centuries they’ve played a major role in Indian tradition. Bengal tigers are carnivore which means they eat meat. Its large sharp teeth make it perfect for eating and catching pray. They tend to eat monkeys, buffalo, deer, wild pigs, boars, and other large animals. They will travel for miles just to hunt. While hunting their distinctive coats works wonders for camouflage. I mean there’s no two tigers with the same exact stripes! Like how cool is that? Totally cool. No animal is even capable of hunting an adult Bengal tiger. Of course a few other wild animals can cause harm, but it would mainly be upon an cub. Out of a number of potential predators common ones like wolves would be expected of such.